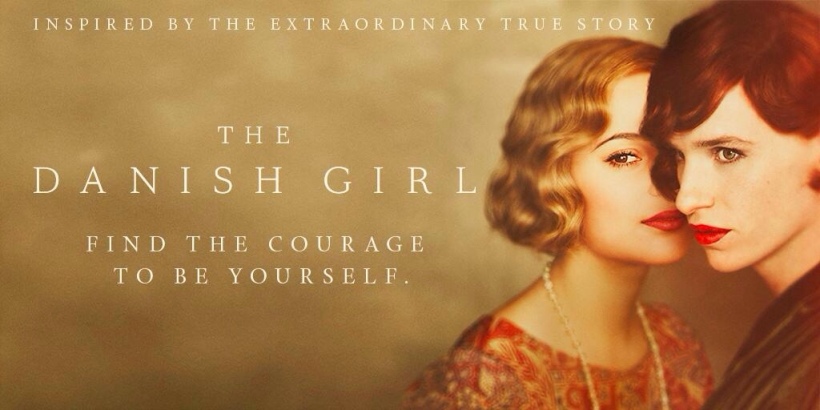 The film opens with the hauntingly empty yet darkly green Danish landscape. A series of lonely yet similar trees mark the spot and later feature in varying moods in the paintings of Einar Wegener (Eddie Redmayne). His wife Gerda (Alicia Vikander) on the other hand, finds it astonishing that he can paint the same landscape over and over again. She prefers painting portraits. Whatever they choose however, is revelatory of how they see; either introspective or else the female gaze.

Painting is the central motif of the film. It is also a metaphor of creation and storytelling. Just like how two colours are mixed on a palette to create a new colour and how a dab of fresh paint can be fused into a painting – the story similarly unfolds, slowly, deftly, leading to that moment of poignant awareness that you have grasped what the narrative is about.

Einar poses for his wife in stockings, holding a dress against his body because her model failed to turn up. For Einar, it is a strange sensation to watch how the clothes feel so beautiful against his skin. What starts as just a momentary experience becomes more and more the centre of their marriage. He secretly wears his wife’s nightdress and while perturbed, she encourages his exploration of sexuality by taking on a dominant and supposedly masculine role in their lovemaking. The female Einar – Lili Elbe, who Gerda introduces as Einar’s cousin begins to step into the public space more often. Then the barriers separating the private space from the public space, begin to come crashing down.

The ebb and flow of the narrative – the growing consciousness and the crashing reality is accompanied by Alexandre Desplat’s music which lends it a stirring quality like breakers on a desolate yet verdant coast.

The film portrays a different idea of marriage and poses a hard question – can you love someone so much that you would be willing to aid them in their journey of self-awareness, even it if erases you?

Alicia Vikander gives a powerfully moving portrayal of a woman who supports her husband’s need to be a woman even though as she puts it she “needs her husband…and I need to hold my husband.” Eddie Redmayne as Einar/Lili is devastatingly vulnerable in his exploration of the psyche of a person who realises that they are not living their true self. The film may seem lengthy to some and probably melodramatic in its portrayal but it is still a powerful exploration of identity and sexuality.

Sexuality is a misunderstood concept even today, though the very real possibility of being forcibly locked up because you’re a threat does not exist anymore.

The Danish Girl portrays how people are quick to classify something as abnormal and then attempt to suppress it, even harshly if required. It brings out also, the fragility of our identities. How a certain kind of realisation can change how we perceive things and how we are perceived. For instance, Einar in the beginning, dressed as a man walking out, is not noticed, but a slightly feminised version of his attire and mannerisms leads him to be assaulted on the streets. But what has been acknowledged in the narrative is the role of people like Hans (Matthias Schoenaerts), Ulla (Amber Heard) and Henrik (Ben Whishaw) who are sympathetic of another’s exploration probably out of an understanding of their frailty.

The unsettling question is how far have we chosen our own identity and how far would we take that exploration?

Wazir is an action thriller based on a story by Vidhu Vinod Chopra. Set in Delhi but tied up with Kashmir, the film follows an ATS officer Danish Ali (Farhan Akhtar) as he tries to uncover the links between a terrorist organisation and the politician who is secretly funding them. Things very soon spiral out of control and professional pursuits become personal vendettas when his daughter dies in the crossfire. Estranged from his wife Ruhana (Aditi Rao Hydari) and debilitated by grief, he befriends a wheelchair bound chess master Pandit Omkarnath Dhar (Amitabh Bachchan).

Chess is central to the narrative and the metaphors of chess colour every aspect of it. The scenes where the, at first detached Danish is defeated by five year olds are fun to watch. They are a pressure-valve from the rather dark narrative. While these chess games make Danish and Omkar close friends, they also create an empathetic space wherein both seek understanding and closure as fathers because they are beset by a sense of impotence due to fate’s manipulations.

The film is a meta-narrative; a story within a story or maybe many stories because every character seems to be presenting a story and strangely enough each story is like a move in a chess game – calculated. The characters then become like pieces on a chess board, some also try to be the players. A little fore knowledge of chess may make certain things apparent like how the Elephant can by castling defend the King or how the Wazir (Bishop) can take on the powers of a Queen. Deciphering this make it something to chew on.

One has to draw parallels with Suniel Shetty’s character in Main Hoon Na who says something to the effect of ‘all wars are personal’ – this is central to the film.

However, an analogy for the film is that of the soufflé that didn’t rise. It is delectable and most would devour their portions but it lacks something. A short story is a tightly packed narrative and since a film cannot be so compact, it needs to be more expansive. Yet at times the film needlessly explains itself. That makes it a little tedious to a viewer.

The cinematography is beautiful but the editing could have been tighter. John Abraham’s character is wasted in the film but Sartaj (Anjum Sharma) forms a good foil to Danish’s impetuosity. Danish is a problematic character because he charges blindly into a situation and his reaction at the penultimate moment of the film is incongruous in terms of human behaviour. This could be seen as a flaw in the narrative structure.

The characters are on the whole well-crafted with Omkarnath Dhar standing out as the showman and Yazaad Qureshi (Manav Kaul) as a pivotal character. A scene that is testament to Kaul’s abilities is when he calmly sits down and rolls up his sleeves, all the while keeping a civilised appearance and calmly questioning his daughter. It leaves a knot in the stomach that threatens to overwhelm the viewer’s composure.

A warm glittery morning #acupoftea
Tokyo Godfathers is an apt film for this Christmas season - three homeless people find an abandoned baby and go through some miraculous adventures to find the birth parents - for full review, click on linkinbio #tokyogodfathers #satoshikon #japaneseanimation
Through storytelling, performance and a slice of life narration Kantara fuses myth and horror to create a compelling film #kantara #kannadacinema #rishabshetty
Ponniyin Selvan I is based on Kalki Krishnamurthy's eponymous novel series about the Chola Empire. The political struggles, both internal and external, fuels this narrative. Click on the link in bio for more
Brahmastra Part One - Shiva is the first in Astraverse series by Ayan Mukerji - an Indian mythological take on the MCU. It follows Shiva in his search for the truth to his connection with fire and his strange visions. For full review - link in bio #brahmastra #ranbirkapoor #aliabhatt
My anime recommendations that could become your starter pack if you're just stepping into the world of anime 😚😚 #animerecommendations #anime Click on the link in bio for full article
My Top 20 K-dramas that I would unstintingly recommend 🤗🤗 #kdrama #kdramarecommendations Click on link in bio for the full article
Dune follows the journey of Paul Atreides as he learns to navigate the harsh world of Arrakis in the midst of political machinations while grappling with strange powers #dune click on the link in bio for full review
Violet Evergarden is a series about a child soldier who has been treated as a weapon all her life and when the war ends, she works as an Auto Memory Doll (writing letters for others) so that she can understand emotions❤️ #violetevergarden #anime #war Click on linkinbio for full review
Loading Comments...