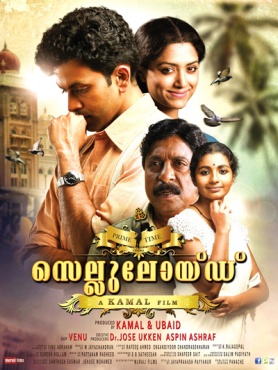 Malayalam cinema is known for its mature handling of the medium and its introduction of themes ahead of their times. It then seems fitting that the Father of Malayalam cinema – J.C. Daniels would be a pioneer in this regard.

However, as forward as the themes of Malayalam cinema were and are it is balanced out by a rigidity of thought and caste prejudices. At present it may be slight in comparison to earlier times but it still exists and so the film functions simultaneously as a critique of Kerala society.

Celluloid follows the ill-fated career of J.C. Daniels (Prithiviraj) who has a dream to make the first Malayalam film. It follows his journey to erstwhile Bombay to meet with Dadasaheb Phalke (Nandu Madhav), who explains various aspects of film making. After a few delays, he manages to get hold of the equipment and a British cameraman, and begins his filming. Since he sold his land to finance the film, to keep costs low, he directed, acted, edited and also wrote the screenplay.

Unlike his contemporaries, his film Vigathakumaran was not based on mythology but was a social drama. Ironically, his own life resembled a social drama because when Bombay-based actor Lana proved difficult to work with he got Rosie (Chandni) a Dalit Christian (the term is ironic since the latter ought to cancel out the former but…) to act instead. She played a Nair lady but when the film was screened the orthodox upper-caste men took offence at the idea of a lower-caste woman playing a Nair woman and boycotted the film.

The film parallels J.C. Daniels life with the investigation of the journalist Chelangatt Gopalakrishnan (Sreenivasan) into the film career of this obscure dentist who was once known as J.C. Daniels, the director of Vigathakumaran.

The relationships portrayed in the film have been beautifully sketched out such as the love based in friendship shared by J.C. Daniels and his wife Janet (Mamta Mohandas). A strong woman who stands by her husband and remains the factor that keeps them knitted together. Her sisterly treatment of Rosie, ignoring the caste barriers makes for some of the most moving scenes within the film. A scene that stood out for me, for its poignancy, was decking Rosie in the attire of a Nair lady and her amazement at their ‘presumption’ that it was normal to treat her as equal.

A technically sound film, it uses film conventions to create symbolism within the film such as the shadow play on the whitewashed walls that eases with breathing. The narrative of the life continued in a closed carriage.

The film is about idealism, regret, apathy at the sight of continued failure and the slight flicker of hope that stays sometimes like a disease and sometimes like a blessing. It is also about the burning need to tell a story – to find expression.

Over and above, though it is a tribute to the first filmmaker in Malayalam. A technically sound film, its obvious use of technique is in itself a tribute to J.C. Daniels – whose first film in some sense set the base for the future of Malayalam cinema.

My anime recommendations that could become your starter pack if you're just stepping into the world of anime 😚😚 #animerecommendations #anime Click on the link in bio for full article
My Top 20 K-dramas that I would unstintingly recommend 🤗🤗 #kdrama #kdramarecommendations Click on link in bio for the full article
Dune follows the journey of Paul Atreides as he learns to navigate the harsh world of Arrakis in the midst of political machinations while grappling with strange powers #dune click on the link in bio for full review
Violet Evergarden is a series about a child soldier who has been treated as a weapon all her life and when the war ends, she works as an Auto Memory Doll (writing letters for others) so that she can understand emotions❤️ #violetevergarden #anime #war Click on linkinbio for full review
A Dessert platter ❤️ #whenyoucantchoosejustone #desserts #mealswithfriends
Nevertheless follows the stories of young art students at a university, navigating complicated relationships in a world of cynicism and not enough commitment #netflix #koreandrama #nevertheless Click on link in bio to read ahead
Eton Mess ❤️❤️❤️ Strawberries, meringue and whipped cream #dessert #etonmess #dessertswhenyouwaitforpeople
Steins;Gate is an animated series about time travel. An oddball group of friends invent a phone microwave that allows them to send messages that alter the future. Click on link in bio to read further #steinsgate #japaneseanime #netflix
Calamari, Steaks, Apple Pie and Creme Brulee - a hearty meal 🤗🤗😍❤️❤️❤️ #meal #foodmakesmehappy
Loading Comments...