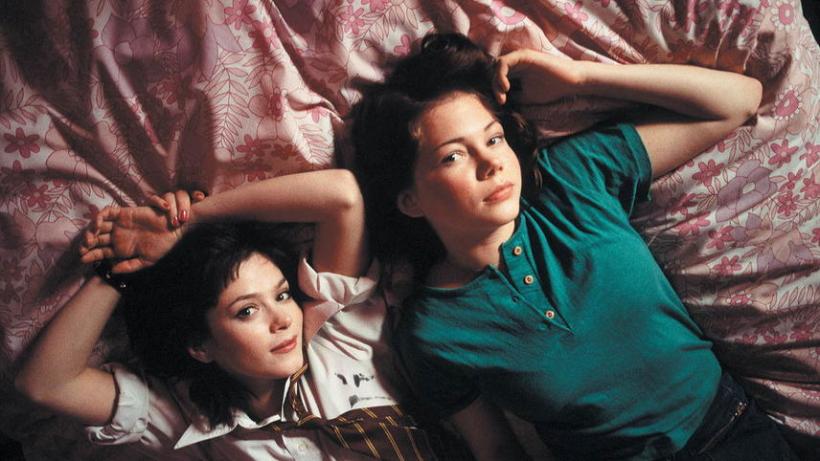 Me Without You is a poignant film about the toxicity of long friendships. It follows the friendship of Holly (Michelle Williams) and Marina (Anna Friel) from 1973 when they are 12 years old to 1978; 1982; 1989; 2001 – each time period marking an important curve to their relationship.

Marina and Holly each have something the other desires. They are not happy with their lives and want the other’s life. This discontent grows as they grow. Marina feels unloved because her parents are separated and seem particularly self-involved. Holly’s family is Jewish. Her mother is both overprotective and seems to highlight Holly’s insecurity about her appearance. Marina wants stability and Holly wants to be as beautiful and carefree as Marina.

When they are kids, their ‘admiration’ for each other’s life does not get out of hand. But with the passing of years they realise the truth of the circumstances around them and find they cannot hold on to childish fantasies anymore. It is then that their jealousy becomes obvious.

For Marina, her looks and outgoing personality becomes the superior ‘skill’ she can lord over Holly. But when ‘mousy’ Holly manages to attract the attention of Nat (Oliver Milburn), Marina’s brother, at a drugs and music party his girlfriend organises, Marina is unable to deal with it. She instinctively realises that they will probably be great for each other even though at that point Nat wouldn’t date her since he was with someone else but just maybe later. This is the point when the poison seeps in and there is no more childlike excitement at being ‘Harina’ – Holly+Marina.

However, there is an awareness that they need the other, so no one overtly rocks the boat but covertly they try to undermine the other. For instance, when they are studying at university Holly finds herself attracted to her professor Daniel (Kyle MacLachlan). Marina finds him silly but later makes it a point to seduce him and it is as though she wants to hit out at Holly. When this incident nearly escalates into a full-fledged fight, Marina instead of letting it damage their friendship deflects it by damaging the fledgling relationship Holly and Nat develop after he returns from his French sojourn.

Holly and Marina are frequently referred to as being each others’ mothers, Siamese twins, a married couple – hinting at their cloying proximity. A proximity, that is rather desperately maintained but has no real engagement.

A pivotal scene in the film, which marks Holly’s growing frustration at Marina’s controlling behaviour, and yet fear against openly voicing it out is when she mentions being puzzled at Marina’s decision to become Jewish after marriage since her fiancée is Jewish. Marina’s retort – “Why shouldn’t I be Jewish? Huh? It gives me a sense of identity” and Holly’s response in an undertone, “Really? Whose identity?” underscores what has happened to them.

In an unequal relationship, one will play the role of the manipulator and the other the victim. The victim will eventually either lash out or accept the victimisation and grow to use it as a cloak to garner sympathy resulting in possibly an even more warped personality. What would be healthier would be to claim individuality and strike out alone. However, it is hard when that said relationship is with your closest friend.

Me Without You isn’t saying that female friendships are warped or that the idea of childhood friends sticking together in a healthy manner is a fairytale but that true growth can only happen with some distance from those who know you too well. The truth is, they know only one aspect of you and would find it strange if you became something else. But moving away, isn’t to destroy an older relationship but to discover yourself in newer relationships.

Maybe why female friendships are more prone to manipulation has probably to do with female socialisation. Boys are socialised to ‘let out’ their frustrations especially with each other so they get into physical brawls when there is a tense moment. But girls are told to ‘rein in’ their emotions and hence let it fester.

I found this an incredibly moving and beautifully shot film because of the rounded characterisation, the chemistry between the lead characters and how the narrative keeps you hooked without being soppy. Also, the ending I find is interestingly open-ended.

My anime recommendations that could become your starter pack if you're just stepping into the world of anime 😚😚 #animerecommendations #anime Click on the link in bio for full article
My Top 20 K-dramas that I would unstintingly recommend 🤗🤗 #kdrama #kdramarecommendations Click on link in bio for the full article
Dune follows the journey of Paul Atreides as he learns to navigate the harsh world of Arrakis in the midst of political machinations while grappling with strange powers #dune click on the link in bio for full review
Violet Evergarden is a series about a child soldier who has been treated as a weapon all her life and when the war ends, she works as an Auto Memory Doll (writing letters for others) so that she can understand emotions❤️ #violetevergarden #anime #war Click on linkinbio for full review
A Dessert platter ❤️ #whenyoucantchoosejustone #desserts #mealswithfriends
Nevertheless follows the stories of young art students at a university, navigating complicated relationships in a world of cynicism and not enough commitment #netflix #koreandrama #nevertheless Click on link in bio to read ahead
Eton Mess ❤️❤️❤️ Strawberries, meringue and whipped cream #dessert #etonmess #dessertswhenyouwaitforpeople
Steins;Gate is an animated series about time travel. An oddball group of friends invent a phone microwave that allows them to send messages that alter the future. Click on link in bio to read further #steinsgate #japaneseanime #netflix
Calamari, Steaks, Apple Pie and Creme Brulee - a hearty meal 🤗🤗😍❤️❤️❤️ #meal #foodmakesmehappy
Loading Comments...